Rate this post
Explore this article
What are the differences between Android and iOS?Which operating system is better, iOS or AndroidHARDWARE –VARIETY –AFFORDABILITY –LATEST TECHNOLOGY – SECURITY –CUSTOMISATION –STORAGE – Which is better for you Android or iOS?Benefits of using iOS devices – Benefits of using Android devices – Last Words –

The world of smartphones is constantly changing. Today, there are two major operating systems on the market: Apple’s iOS and Google’s Android. Each has its pros and cons, so how do you know which one is right for you? This blog post will answer some common questions about iOS vs Android. 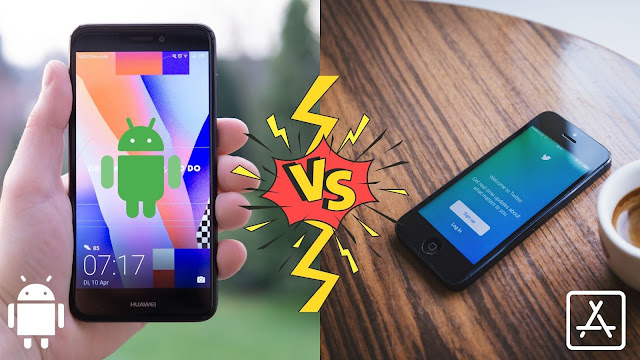 Which operating system do you use? Are you an iPhone user or are your fingers more at home on the screen of a Samsung Galaxy device? If so, have you ever considered that there might be some benefits to switching from one platform to another? There is no wrong answer when it comes to choosing between iOS and Android devices but in this blog post, we’ll cover what each has to offer as well as how they stack up against each other. Read on for all the details! It’s not too late – don’t worry about making a decision now. You can always switch later if something better pops up down the line. Good luck with whichever side of the fence you land on!

What are the differences between Android and iOS?

To start, what are the major differences between iOS and Android? Apple’s operating system is more closed off. This means that you can only get apps from Apple’s App Store, which requires your phone to be an iPhone or iPod touch.
The company also has a curated selection of these apps in its store; it won’t allow everything on the market onto its devices as Google does with Play Store for Android phones. On top of this, iPhones have been shown to have slower updates than Androids when new versions come out. For example, even though Android 11 was released almost a year ago now, people still don’t know when they’ll finally see it available as their latest update–if ever at all. Meanwhile, some manufacturers like Samsung and OnePlus are giving up to two years of updates.
One of the biggest differences is that iPhones come with Siri installed as a default app where Google Now has to be downloaded onto your phone or tablet separately before it too will work. However, Siri only works for Apple devices whereas Google Now also functions across other platforms like Windows phones and tablets.

Which operating system is better, iOS or Android

This may seem like a difficult question, but with the following points, hopefully, it will be easier. I’ll take an in-depth look at iOS and Android to help break down their pros and cons so that you can decide which one suits your needs best.

The iPhone has more powerful hardware than the Android phone which means it can handle apps better, run them efficiently. There’s more space for customization like using your own wallpaper on top of what comes out of the box – but when it comes to performance it depends on the device.

Android has more phone options, including different brands and models that are compatible with the OS. For example, the Samsung Galaxy S series is a popular pick for many people.
Android offers a wider range of devices than Apple does – so while iPhones only come in three sizes (regular size, plus size, and XS Max), you can purchase an android phone from anywhere between $200-$1000+.

iOS only works on iPhones/iPod Touches which can be expensive if you don’t already have one or want to buy them outright from Apple’s store. The phones themselves also typically lack features like wireless charging something that most Androids offer these days (although this does depend on what your carrier offers).
If you’re looking for apps at a cheaper price than those in Google Play Store, then iOS could be better since some of their devices let developers charge less money per app as opposed to other platforms where they may need. -There are some free applications available through iTunes/the App Store, but they tend to have more in-app purchases than their counterparts – often leading people into buying features they had no intention of purchasing otherwise because there’s nothing stopping them from doing so (and developers know this). This doesn’t happen as much with Android apps.

If you care about the latest technology, go with Android because it has access to new versions more quickly than iOS. This is mainly due to updates not having to wait for the approval.

If you are worried about security, go with iOS because Android has a higher risk of malware and viruses than iOS does. This is mostly due to the fact that there are more screens for malicious ads on an Android device meaning it’s easier for them to pop up.
There is no bloatware on any Android smartphone which is something many iPhone users complain about being forced into having preinstalled apps they don’t want or need taking up space on their home screens.

Android offers more customization; for example, most phones come with the Google launcher and can be customized to suit individual tastes. And if that’s not good enough, there are plenty of other launchers available in the Play Store as well.

Android takes up more space on your phone. Android has been known for using up as much as three times the storage it needs because of how bloated the operating system is. iOS, meanwhile, doesn’t need nearly that much space and keeps things relatively clean thanks to its lack of bloatware.

Which is better for you Android or iOS?

There are a lot of differences between both the platforms we can only tell you the differences, Pros and cons, Usability, etc but In the end, you have to decide which one suits you better Android or iOS. There is no clear winner that’s why it all comes down to personal preference when deciding which system works best for you.

Apple and Google are two of the biggest names in operating systems. iOS is more expensive than Android, but it offers a smoother experience with fewer bugs. If you’re looking for something that’s easy to use on your mobile device, then I would recommend Apple over Android because it’s just easier to navigate through the menus smoothly without encountering any difficulties. The other option is going with an Android phone because they run cheaper than iPhones and iPads, but there are some cons that come along with using this operating system as well such as having a smaller app store selection and dealing with lagging at times. It really depends on what kind of person you are when it comes down to choosing which one is better for you.
I hope this article has helped you make up your mind about which operating system is right for you. If not, please comment below and we’ll do our best to help!

1.11.15· Strategy
4.4·MOD Info Sufficient currency is not reduced![Note] If the currency does not increase, please go online!

1.40.0·Video Players & Editors
4.4·MOD Info Mx Player Pro All Features Unlocked
Home › Blog › How to Choose Between iOS and Android: Pros, Cons, and Common Questions
× Can I help you?