Remember back in the day when Tamagochi was the most advanced mobile game out there? Thank the maker for technological advancement! With games like COD: Mobile, and PUBG, we’ restarting to see FPS game developers really push the limits of mobile gaming.
I’ve hand-picked the Top 25 Best FPS games for android and iOS! Lock and Load, get the strap and get ready to send rounds downrange with these solid first-person shooters. 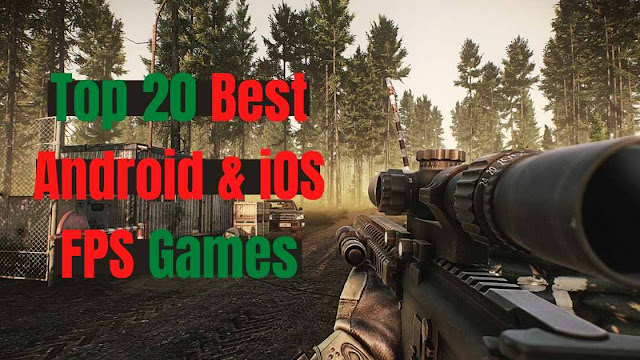 All the Games we are going to tell you in this list of best FPS game in 2020 are available in both the mobile platform iOS and Android.

Bright Memory Mobile features a portable hack and slash shooter, that appreciates the delicacy that is manic melee combat with the skill-based shooting. This game looks like a PG-13 Pocket version of DOOM, were fast-paced combat and flashy abilities will keep your blood pumping. The only thing- jeepers mister, there's a lot of controls on your little screen. With a controller in hand- the pacing is great, but the touch controls on the screen, and very liberal use of aim assist, leave the game feeling clunky and awkward at times.

Prep for the impending Zombie Apocalypse withThe Walking Zombie 2. Participate in a satisfying and straightforward zombie Survival Shooter. The game opens with an homage to Dawn of the dead with a pregnant woman becoming a zombie mid-baby delivery. This game throws you right into it’s a cartoony and whimsical story - with simple mechanics. The game does feature multiple real-time-based objectives, which can allow plenty of Reddit browsing between objectives. Travel, kill zombies, complete mission objectives, then head to the pub until this all blows over.

Hot Trigger uses the same fighting mechanic made popular by SuperHot, where if you’re standing still- time moves slowly. When you start moving- time starts moving with you. This is one of the best mobile FPS games out there. The controls are slick, the visuals are absolutely gorgeous, and it makes me feel like I’m in John Wick or The Matrix. Man, Keanu Reeves is just the best isn't.

If you want a mixture of Dead Space and MassEffect, and you prefer sequels to originals - Dead Effect 2 is your on the going answer. With a professional voice acting team, realistic physics, and movie-quality sound design, Dead Effect 2 is a console-quality Sci-Fishooter / RPG. Train, develop, and upgrade your character and their gear, weapons, and body implants to blast nightmarish sci-fi zombies into bloody pulps. The dialog can come off a little cringe-worthy-but it adds a certain…Resident Evil vibe to the game.

Jumping into the Battle Royale genre with it's the latest mode, Danger Close is an Ad-free, looter shooter with tactical gunplay. This game doesn’t hide that it is in active development, and instead offers a player influenced game, where the developers are constantly releasing free new content. This is a game that respects its community-and provides an intense, mobile, satisfying to win experience for its players. The controls are easy and intuitive and remind us that less is more when it comes to mobile FPS controls. There’s also a pirate map.

If you need your Overwatch fix on the go-ShadowGun War Games is an outstanding PvP experience on mobile. To say this game is similar to Overwatch is an understatement. The level design, architecture, color schemes all shout Blizzard. The game looks like Overwatch- but doesn’t feel like Overwatch. When you have a 5v5 game, with only 5 characters to choose from- it completely eliminates any creativity in your team comp. Place as Slade, who’s the least favorite number is 76 or Jet, who can disappear without a trace. The reminders after every battle of In AppPurchasable content get’s old quick.

Frontline Guard is a free to play mobile shooter set in World War 2- and we’re gonna be doing one thing and one thing only - Killin’ Nazis. Make your great grandfather have flashbacks of his time in Europe with authentic battlefields and locations. With fully customizable classes, you can find a unique fighting style, in a cartoon version of one of the most brutal and bloody wars the world has ever seen. The controls are easy to learn and hard to master allowing for dynamic, 360 No-Scopes.

I know you’re saying to yourself- “Dr-bringer of dope reviews, do you have a mobile shooter that includes a terrifying prequel to Night of the Living Dead and an expansion to the Ghostbusters universe?”  because Into the Dead2 does exactly that. Maim, stab, and shoot your way through hordes of zombies with an impressive armory of weapons. Still not with me? YOU CAN HAVE LOYAL CANINE COMPANIONS. Canine accompanied Zombie apocalypse is the best zombie apocalypse if you ask me. Just take a look at that cute little baby gone a zombie for me.

With stunning graphics, amazingly fluid mechanics, and great customization, Modern Combat 5: Blackout may be one of the best FPS available on mobiles. The games multiplayer is accompanied with a full single-player campaign. DID YA HEAR THAT CALL OF DUTY? WE LIKE SINGLE PLAYER CAMPAIGNS STILL. The Multiplayer has all the standard FPS game types; TDM, capture the flag, and free-for-all, along with VIP (kill the marked player), being some of the more familiar options. This game is COD: Mobile’s competition for good reason- it’s fast 7 it’s fun.

MaskGun is an online Multiplayer 3D FirstPerson Shooter built for Mobile Devices- that lets you play as much as you want. There’s no ‘energy system’ restricting your play-time like some other free to play games. The game boasts a RealTime Friends System to play with your friends online. You do need friends to use this feature-which can add the extra difficulty of hurting your back from carrying your casual friends. Bomb- diffuser is a fun game mode if you have the luxury of teammates who play the objective.

Do you speed through most other Mobile FPSgames? Well, good luck doing that with Kill ShotBravo- it has over 2400 Missions. That’s at least 2400 headshots, enough to make the newest snipers into grizzled veterans. Armed with deadly sniper rifles, machine guns, and the latest in military tech- put your skills to the test as you play a Special Forcessolider- navigating the globe- and shooting people in the face. Gun down terror threats in single player, or test your skills against other snipers in its PVP mode in this free first-person shooter

Let’s go back to a simpler time- when Russia and the US were considering the mutually assured destruction- that every Fallout fan is waiting for. Legacy of the Cold War, lets you take control of a soldier who was injected with the “FZ9” Serum, essentially turning you into the perfect, time slowing, killing machine. Hmm, “FZ9’s” experimental program by the government sounds awful similar to the MK Ultra Program- just with less LSD involved. The bullet-time-slow-mo makes this game a satisfying shooter, with none of the side effects of a superhuman serum!

Hijacker Jack and Jill went up a hill to fetch some classic 80’s game design. This game has a beautifully rendered environment that uses real-time Full Motion Video, in a live-action, choose your own adventure style FPS. This means real video, with real people, with you in the driver’s seat. The game’s story choices allow you to change the outcome of the game, with 4 unique endings. The game’s live-action, real characters really up the stakes- as well as the immersion, making this one of the most immersive mobile games on the market.

Snipe, snipe, and continue to snipe some more in Stick Squad-Sniper Battlegrounds. This game knows exactly what- and who it is-with an over the top story that does not take itself too seriously. Stickman shooters always perform well on mobile platforms, due to their simple, but effective design. Shoot your way through baddies up close, or take them out from a distance- making sniper shots that would make Deadshot smile. Remember the Suicide Squad…I try not to. Details like adjusting for wind, and calibrating your scope, help make those long-range headshots all the sweeter.

If you’re looking for a first-person shooter you can play while your 6-year-old nephew is hovering over your shoulder watching your screen, Kuboom 3D is a family-friendly, 5x5 mobile shooter. The guns are high quality renders, with cute little block people to bust a cap in. The game features an auto shoot function, which can be nice if you are trying to play and dodge Cheeto fingers.

World War Heroes is not for the faint of heart. The WWII, PVP based shooter’s Hardcore Models mobile fun on the bun. Gone are the days of shields- and dumping a full magazine to kill one player- and one or two bullet kills are here to stay! Put boots on the ground, with 57 unique weapons, or roll out some steel piloting your own tank. The hardcore, fast-paced combat leaves little room for error in its multiple game modes. World War Heroes is one of the best WWII shooters available for mobile- now go shoot some enemies.

When it comes to FPS on Mobile- we can talk shooters and battle royales without talking about PUBG Mobile. PUBG was at the forefront of the Battle Royale trend long-before Fortnite, Apex Legends, or COD Warzone- and the mobile port features the full game. The map is massive, and the OG looter-shooter maintains its playability with slick, controller supported controls. Enter 100 Player Deathmatches that will show you how stressful the Hunger Games would actually be. Survival is key, and a frying pan just might save your life.

You knew this one was coming, and as much as I hate to admit that A developed game, that hasn’t had an original idea since the original Zombies Mode, COD: Mobile is the peak of mobile FPS. The guns are slick, the controls are slicker, and the campers are real. Revisit fan-favorite maps as you die to kill-streaks, kid’s calling your mother expletives, and of course….campers. Relive the experience of COD- on the go, with one of the most polished mobile FPS games I’ve ever played. 1 v 1 me bro- no hard scoping, or knives only. Once I beat your butt at Nuketown II from black Ops, we can work together in the full zombie's mode The game also features a full battle royal mode.

These are some of the best First-person shooters (FPS) games available in both the mobile platform iOS and Android. hope you find your game in this list of Top 20 FPS Game in 2020.